This chapter focuses on the emergence of the United States as a ‘superpower’ in 1945. It begins with a discussion of how America rose from being a group of British colonies to a continental empire containing human slavery during the period 1776–1865. It then examines how the reunification of the country after the Civil War, and the industrial revolution which followed, turned America into the world’s leading economic power by the early twentieth century. It also considers Woodrow Wilson’s empire of ideology and how the United States got involved in World War I, how the American economic system sank into depression between 1929 and 1933, and US role in the Cold War between 1933 and 1945.

This chapter examines how the United States evolved as a world power during the period 1776–1945. It first considers how Americans set out after the War of Independence to establish a continental empire. Thomas Jefferson called this an ‘empire for liberty’, but by the early nineteenth century the United States had become part of an empire containing human slavery. Abraham Lincoln determined to stop the territorial expansion of this slavery and thus helped bring about the Civil War. The reunification of the country after the Civil War, and the industrial revolution which followed, turned the United States into the world’s leading economic power by the early twentieth century. The chapter also discusses Woodrow Wilson’s empire of ideology and concludes with an analysis of U.S. economic depression and the onset of the Cold War. 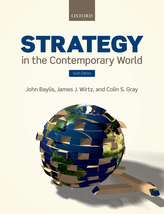 5. The Causes of War and the Conditions of Peace

In  Strategy in the Contemporary World (6th edn)

This chapter examines theories that explain the causes of war. It considers ideas advanced by political scientists, sociologists, biologists and philosophers, showing that different explanations of war give rise to different requirements or conditions for peace. After highlighting the difficulties in studying war, the chapter discusses human nature explanations of war, citing such factors as frustration, misperception, misunderstanding, miscalculation, and errors of judgement as well as the role of human collectives including factions, tribes, nations and states. It then describes the bargaining model of war before turning to inter-state wars, intra-state conflicts, and ethnic conflicts. It also explores the debate over whether ‘greed’ or ‘grievance’ are the main causes of civil wars. The chapter concludes that identifying a single cause appropriate to all wars is an exercise in futility and that a worldwide ‘just’ peace is unattainable.

In  The Globalization of World Politics: An Introduction to International Relations (8th edn)

This chapter examines the power of gender in global politics. It considers the different ways in which gender shapes world politics today, whether men dominate global politics at the expense of women, whether international—and globalized—gender norms should be radically changed, and if so, how. The chapter also discusses sex and gender in international perspective, along with global gender relations and the gendering of global politics, global security, and the global economy. Two case studies are presented, one dealing with the participation of female guerrillas in El Salvador's civil war, and the other with neo-slavery and care labour in Asia. There is also an Opposing Opinions box that asks whether war is inherently masculine. 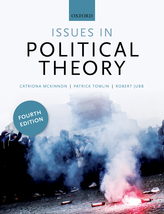 This chapter explores toleration, which enables the peaceful coexistence of conflicting views and ways of life within the same society. It originally emerged as the political solution to the religious wars that devastated Europe after the Reformation. Toleration as the suspension of political interference in the religious creeds of people was affirmed as the only way to stop the killings for the sake of eternal salvation. At its origin, toleration was patterned on a model of civil coexistence that implied a divide between political affairs and private matters. The contemporary debate on toleration consists of three approaches: moral, liberal, and critical. The moral analysis of toleration is mainly concerned with the definition and justification of toleration as a social and moral virtue; the liberal analysis is focused on toleration as a political principle; and critical political theory proposes toleration as recognition.

This chapter examines Mexico’s gradual and largely peaceful transition to democracy, followed by a sudden descent into civil war. In the closing decades of the twentieth century, Mexico’s major challenge was political democratization. Today, it is organized criminal violence. Vicente Fox’s victory in the presidential elections of 2000 ended more than seventy years of hegemonic party rule. However, a civil war soon broke out, sparking a pandemic escalation of violence related to organized crime. The chapter first traces the history of Mexico from its independence in 1821 to the Mexican Revolution of 1910–1920 before discussing the foundations of electoral authoritarianism in the country. It then considers the structural bases of regime change in Mexico, along with the process of democratization by elections. It concludes by analysing why a civil war broke out in Mexico following its transition to democracy.

21. The Onset of the Syrian Uprising and the Origins of Violence

This chapter examines the early stages of mass mobilization in Syria that sparked the Arab uprisings. Starting from December 2010 in Tunisia, Arabs from various walks of life took to the streets in protest against decades-long authoritarian rule, repression, and corruption in what came to be known as the Arab uprisings, or Arab Spring. These waves of protest reached Syria in March 2011. While Syria’s protests initially were largely peaceful, they soon gave way to violence, which culminated in an armed insurgency by the end of 2011 and, combined with regime brutality, a civil war. Before explaining how, when, and why the uprisings happened, the chapter provides a short history of growing popular discontent that resulted in the onset of the Syrian uprisings. It then analyses the roots of the uprising’s militarization and the ensuing popular mobilization and concludes with an assessment of the Syrian civil war.

This chapter examines human rights, development, and democracy in Sudan. Since gaining independence in 1956, Sudan has been dominated by a northern Muslim ‘ethnocracy’ — a factor that helped precipitate secession of the Christian south in 2011. Long periods of military rule and civil war have spawned a culture of authoritarianism and violence. The chapter first provides an overview of political instability in Sudan before discussing the two civil wars and perpetual conflicts endured by the country throughout its history. It then considers the political economy of human development in Sudan, focusing on the link between underdevelopment and the politics of oil, as well as the failure of democracy to consolidate and the role of civil society in popular uprisings. The chapter concludes with an assessment of the connection between development in the Sudanese context and the need for improving human rights.

This chapter examines the historical evolution of U.S. foreign policy in Africa. It first considers the history of U.S.–Africa relations, particularly during the Cold War era of U.S.–Soviet Union superpower rivalry. It then turns to the immediate post-Cold War era, in which a New World Order — a vision in which the United States and the United Nations could combine to establish freedom and respect for all nations — held out the possibility of positive U.S. involvement in Africa. It also discusses American policy towards Africa after 9/11, focusing on President George W. Bush’s efforts to incorporate Africa into Washington’s global strategic network as part of the new war on terror. The chapter concludes with an assessment of Barack Obama’s peace diplomacy as an approach to the civil war in Sudan.

This chapter examines the decline of détente during the period 1977–9. Détente suffered in part from being identified with Richard Nixon. After 1973, conservatives increasingly questioned détente, felt that the Strategic Arms Limitation Talks (SALT I) benefited the Soviet Union most, and were disturbed by an apparent pattern of communist adventurism abroad, in the 1973 Middle East War, Angola, and South-East Asia. The chapter first considers détente and policy-making during the time of Jimmy Carter before discussing the conflict in the Middle East, in particular the Lebanon Civil War, and the Camp David summit of 1978 that resulted in an Egyptian–Israel peace treaty. It then analyses the Ogaden conflict of 1977–8, the ‘normalization’ of Sino-American relations, and the Sino-Vietnamese War. It concludes with an assessment of the SALT II treaty.

24. The failure of diplomacy and protection in Syria

This chapter argues that the the international community’s response to the Syrian civil war was a failure of resolute diplomacy. It first recounts how a popular uprising was brutally supressed by the Bashar al-Assad government’s military forces, sparking a ‘new war’ where many of the protagonists have more to gain from war than peace. It then considers the diplomatic strategies pursued by regional and global powers, as well as the leading players in the intervention and mediation process such as United Nations Secretary-General Kofi Annan, UN diplomat Lakhdar Brahimi, and Swedish-Italian diplomat Staffan de Mistura. It also discusses the use of crisis management and coercive diplomacy to enforce the Chemical Weapons Convention. The case of Syria illustrates how responsibility to protect (R2P) requires a strong consensus among the great powers in order to be effective.